Report here problems in any of ChibiOS components. This forum is NOT for support.
Post Reply
42 posts

I have a assertion failing in Chibios code, and I am trying to troubleshoot it.

The check condition is the following:

/* The following condition can be triggered by the use of i-class functions
in a critical section not followed by a chSchResceduleS(), this means
that the current thread has a lower priority than the next thread in
the ready list.*/
chDbgAssert((ch.rlist.queue.next == (thread_t *)&ch.rlist.queue) ||
(ch.rlist.current->prio >= ch.rlist.queue.next->prio),
"priority order violation");

What I would expect is that somewhere, in my thread(?) code there is a missing call to chSchResceduleS().

Explore upward your stack trace, it will likely point to the problem. Post it here if in doubt.

Where is that chSysUnlock() called from?

The thread that has higher priority and gets "neglected" is a very simple one. It just blinks an LED, and feeds the watchdog.

The code of the thread is the following:

From the above it is clear that this thread gets in a waiting state due to a call to chThdSleep(MS2ST(STATUS_LOOP_TIME)). No semaphores, events etc, that may need rescheduling, or may cause priority-inversion etc...

I would expect this thread to run without problems, due to the SysTick timer handler. This thread is either sleeping, or running. Each time the systick timer handler is executed, the system ticks counter is incremented, and a reschedule takes place.

How it is possible for this thread to finish its sleep (due to expiration of the delay STATUS_LOOP_TIME, as counted by systick timer, and not get executed, in favor of a lower priority thread?
Top

The assertion fails when another thread (of a lower priority), manipulates a mutex (either locks it or unlocks it).

If by stack trace you mean the functions call stack, as displayed in Eclipse debug view, there is nothing suspicious there. If you mean anything else, please explain me where to find it.
Top

When a very simple piece of code does not seem to do what it is supposed to do then, probably, you are looking at the wrong thing.

Similar loops are in all demos and simply work, see blinker threads.

this still bugs me. I couldn't get a solution, and then I left it due to lack of free time.

No I am back at it. I tried again to track this down with no luck.

Can you please provide me some info on how to get a stack trace, and upload it here?
Top

It depends on the debugger you are using, is it Eclipse? if so then it is the box in the upper left corner of the debugger view.

I have checked this multiple times, but it didn't help me.

Either way, in case it is helpful for you, here you are. 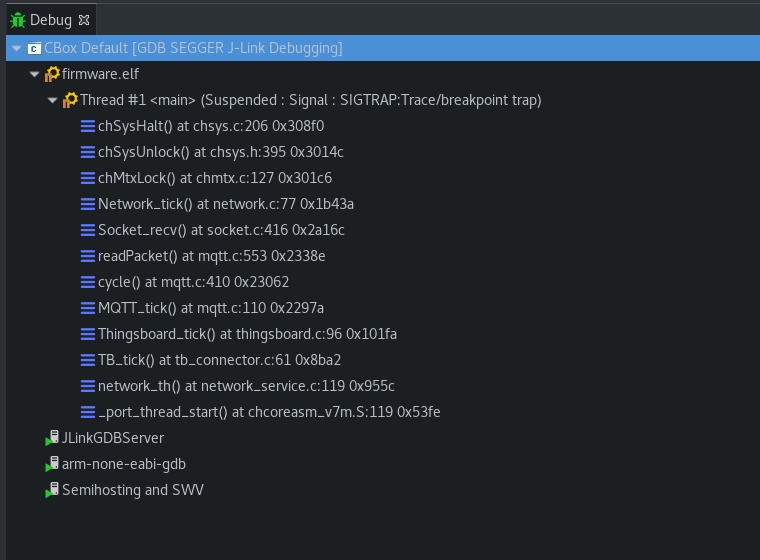 Assuming that's lwIp you're running, I have a vague recollection of a similar problem. In my case it was down to insufficient stack allocation for one of the tasks; a networking-related one IIRC.
(The Chibi plugin for Eclipse will show you stack usage)

Note that you can actually use the debugger to see the states of variables at any point in the execution stack, just by highlighting the relevant level - that can sometimes give clues.
Top

The problem could be originated in another place, are you using any I-class API (those whose name ends with an "I") from thread context?

Users browsing this forum: No registered users and 3 guests